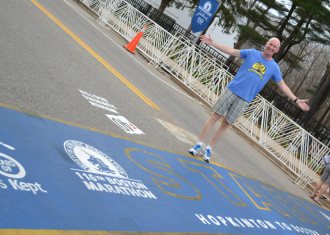 Dr. Koch has been competing in running races since the late 70's. As a high school athlete, he excelled at cross country and track, eventually winning his group mile state championship. His best mile time of 4:28 still stands as a record at his Alma Mater, Wildwood Catholic.  He continued to run for pleasure and competitively throughout his college and chiropractic school years.  He enjoys competing in local races like the Broad Street Run, the Phllly Marathon and many local charity races. He even competed in the prestigeous Boston Marathon in 2012.

What is the key to 35+ years of competitive running? Dr. Koch says "It was the physical stress of running in high school that drove me to visit a chiropractor for the first time. I had tried all the things my family doctor recomended and I was only getting worse. My response to chiropractic care was so dramatic, I not only became a major advocate for chiropractic care, I decided to choose chiropractic as my eventual profession!" All these years later, the combination of chiropractic care, cutting edge training and injury prevention techniques and the right choices in all the aspects of health and wellness have helped Dr. Koch compete at the top of his game. 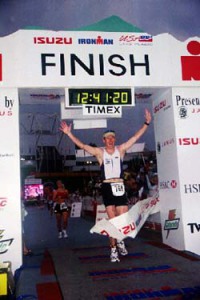 Dr. Koch vividly remembers watching the 1982 Ironman Triathlon TV coverage. This "new" sport of triathlon had the Hawaii Ironman as it's premiere event.  A 2.4 mile swim, a 112 mile bike and a full marathon were strung together in what was considered the ultimate began test of endurance.  That years race featured a young female athlete, Julie Moss, who had been leading the race until the last mile. In what has been described as one of the most epic finishes of any event, she began to physically fall apart, and she ended up crawling to the finish.  "Her desire to push herself to the limit of her physical limits were an insiration to me.  I've alwasy been amazed and inspired by the power of the human body.  I knew at that time that competing in triathlon and eventually doing the Ironman was in my future."

For the last 25 years, Dr. Koch has been competing in the sport of triathlon. In 2001 he fulfilled his dream of competing in an Ironman by doing Ironman USA (Lake Placid).  The fitness and athletic balance that come with training for all 3 sports of triathlon is Dr. Koches motivation now. "A healthy body comes from a balance of our physical and mental stresses.  Triathlon helps me to stay strong and healthy!"

Always tying to help others achieve better health, Dr. Koch has worked to inspire his patients get fit through the sports of running and triathlon.  A long time supporter of the amazing succuessful Mullica Hill Women's Triathlon Club, Dr. Koch now serves on their Board of Directors.  "I'm honored to be able to help this club change the lives of the women in our community.  With about 900 members, they are doing amamzing work to empower women to achieve their health and athletic goals."

Sure Dr. Koch likes to ride his mountain bike, play tennis and golf, lift wieghts, surf, ski and try anything new!  When you have your health, you can have fun doing anything!